Pink Floyd Us And Them Lyrics

(1973)
Movie/Album: The Dark Side of the Moon Album View All Songs
Pink Floyd us and them , Rick Wright originally wrote this song as a piano composition "The Violent Sequence" for the soundtrack to the film "Zabriskie Point" (1970). The director of the film, Michelangelo Antonioni, rejected the song. Pink Floyd re-worked it during the sessions of "The Dark Side Of The Moon" and it became an album's track.
Singer(s): David Jon Gilmour,
Lyricist: George Roger Waters, Richard William Wright,
Lyricsaio

Pink Floyd Us And Them Lyrics

Us (us, us, us, us) and them (them, them, them, them)
And after all we’re only ordinary men
Me
And you (you, you, you)
God only knows
It’s not what we would choose (choose, choose) to do (to do, to do)
Forward he cried from the rear
And the front rank died
And the general sat
And the lines on the map
Moved from side to side
Black (black, black, black)
And blue (blue, blue)
And who knows which is which and who is who
Up (up, up, up, up)
And down (down, down, down, down)
And in the end it’s only round ‘n round (round, round, round)
Haven’t you heard it’s a battle of words
The poster bearer cried
“Listen son”, said the man with the gun
There’s room for you inside
“I mean, they’re not gonna kill ya
So if you give ’em a quick short, sharp, shock
They won’t do it again. Dig it?
I mean he get off lightly, ’cause I would’ve given him a thrashing
I only hit him once! It was only a difference of opinion, but really
I mean good manners don’t cost nothing do they, eh?”
Down (down, down, down, down)
And out (out, out, out, out)
It can’t be helped that there’s a lot of it about
With (with, with, with), without
And who’ll deny it’s what the fighting’s all about?
Out of the way
It’s a busy day
I’ve got things on my mind
For the want of the price
Of tea and a slice
The old man died

1973
English English
Pink Floyd Us And Them Lyrics 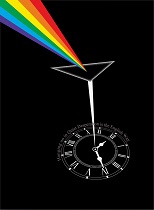